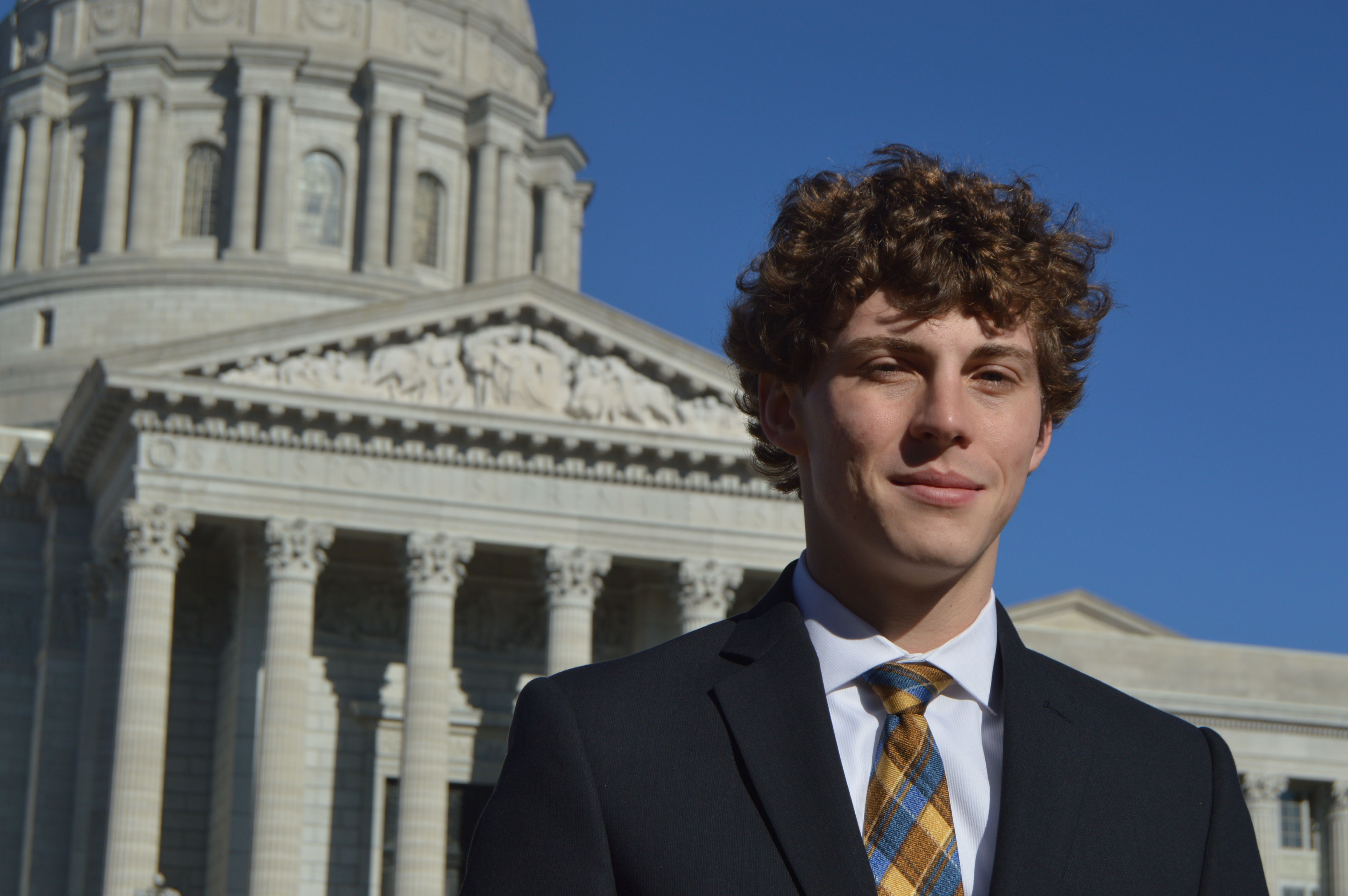 My name is Jack Morrisroe, and I am a junior at the University of Missouri, studying journalism and political science. I am thrilled to be a part of Missouri Digital News for the second year. Beyond political reporting, I enjoy ultimate frisbee and baseball. A lobbyist once pulled me aside just to say his hair looked like mine in the 70's.

Posted 03/23/2016:  With a few pens, the journalist notebooks you're most comfortable with and your laptop you're set for your first day. Well, every day with MDN.

Park directly in front of the Capitol's main entrance, the one with a statue of TJ himself, if there's a spot marked for Missouri Digital/Radio News. If not, there's a few open lots to the west where you can park. Give an editor a call once you arrive.

When you walk in, take in the scenery of where you'll not only be visiting, but have special access to as a journalist. Enjoy it, but don't abuse it.

The office is directly behind the first floor rotunda's stage, on the west side. When you walk in, we'll show you around everything you'll be using as a journalist and what not to touch (there's quite a bit). After a quick tour we'll give you a Marantz (an audio recorder), a cord to plug into at a hearing or floor discussion, and a pat on the back. It will be slightly stressful, but with an editor's phone number you'll have all of your most basic questions answered swiftly.

First rule of thumb: Don't be intimidated. Just because the person you're speaking with was voted into their office doesn't make his or her job any more impactful. They make the laws, we tell the public about them.

Second rule: Take notes. I try to take down names, topics, and time of each person's first word on the recorder. With all that information, you'll never be caught with an empty quote.

Third rule: Whenever possible, plan your story before arriving. It saves your time, stress and story. With a story in mind, you can ask to speak to anyone you need if your quotes aren't what you wanted.

Fourth rule: As soon as you feel comfortable, write your story while the action is happening. While your main focus will be on what legislators and other concerned citizens are saying, you can start getting together a skeleton of your story and will have many more options to expand right after.

My first few weeks of stories were pretty bland and uninteresting. That's what an internship is all about: improving. Don't be too discouraged after edits, you can use the feedback to improve your writing for yourself, the organization, and future job prospects.

There are so many small things I had to question that I got tired of hearing my own voice. The newsroom is initially complex, but extremely welcoming from the very first day on. If you're having trouble feeling comfortable, please let an editor know. They want you to succeed in the medium you're focused on and will do whatever possible to help you achieve your goals within the internship. Every day is less and less intensive in terms of working the equipment, so don't worry. The final product will improve through the semester.

You'll need coffee, and an idea on what the main issues in the budget are. You'll need a recorder with a lot of space, a blank schedule and the determination of a C-student on the eve of a math final. But most of all, you'll need coffee

Planning a story before going to cover it is one of the most droll moments of a journalist's work, but it makes the latter steps so much simpler. Knowing when to focus on the proceedings (because we'll be honest, you can't focus though 5 hours of anything) and write down times and speakers for quality quotes is made so much simpler.

My focus for my two stories on the budget's travails through the House was the University of Missouri. While there may have been some conflict of interest issues at hand, it was a big enough story to cover and I believe I gave Mizzou no favoritism nor excessive criticism on both occasions. I could tune out, while still keeping my ear out for anything dramatic, and focus on what the main points in my story would be. When Mizzou came up, both the system administration and the Columbia campus, I wrote down every speaker, the time they began speaking, and the main focus of their testimony. This was crucial when I needed to find quotes and positions for my story.

Also, be willing to speak to the editors and Phill on what troubles you're having finding an angle and interest. Just about every morning I'm given a story idea without a clue on how to make the topic readable. Through brainstorming and story-narrowing, an interesting, sharable piece will be found. My favorite part of working with MDN is the newsroom and people's willingness to speak on any issue. When my mind hits a blank while writing, I typically shout out what I'm struggling with and my peers help me get to the answer in some form. That idea sharing and openness is the main reason I wanted to become a writer, and I thoroughly enjoy any opportunity to help someone's story improve.

Budget stories will typically have a main focus, something that was the biggest issue of the moment, and then a few quick hits on other interesting moves made. Mizzou was the main story for mine, but an amendment to cut Planned Parenthood passed on the House floor, and another passed amendment would force illegal immigrants to pay out-of-state tuition at the state's universities. Those topics were the next few paragraphs of my story, and a full budget story was complete.

On side notes, getting a packet of the proposed amendments and having all of the bills readily accessible on your laptop will be critical to writing your story on the spot. It'll get you out of the Capitol sooner and with less frustration. Budget is a tough job, but one that will earn you major kudos with your co-workers and editors.

Supermajorities Aren't Evil
Posted 03/23/2016:  When I first started working in Jefferson City for Missouri Digital News, I had this preconceived notion that any legislative supermajority would be in such a position of power as to run over its people. While that may be true when it comes to the state's ethics, the vast majority of the legislature's moves have been simply to help their constituents and provide a healthy and safe state for everyone.

While stalling and obfuscation are major concerns, the Missouri General Assembly is not in the business of purposefully screwing over the state's major cities. Rather, the Republican representatives are there to serve their largely-rural constituency through measures that protect them. While there's a lot of farming bills and protections to the businesses in their districts, they don't seem to have any interest in making any other population feel out of place or drive them out.

An example of this is in the photo ID voting law, which would require every voter in the state to present a driver's license or some equivalent to vote in the state. While many Democrats paint the issue as one of race, it really hurts older people who may not be able to find proper documentation too. If Republicans are looking to rid themselves of one of their best-performing constituencies, their intention is likely what they say: voting sanctity.

However, on ethics Missouri has quite a few issues. My adopted state is the only one in the country to not have any limits on lobbyist gifts and campaign contributions. If a lobbyist wanted to hand out a Lamborghini Veneno to your local senator, they would be allowed to drive it off the lot. All they would have to do is report it to the state's ethics commission.

There's a bill in the Senate to stop just about all lobbyist gifts from being accepted, though it's been on the body's calendar for over a month, after over a day's discussion. With spring break during this week, the lack of any action speaks for itself

On campaign contributions, the legislature is even more reserved. Unprompted at an editors' dinner, "because I know one of you is going to ask this," the president pro tem (the Senate's presiding officer) said the issue was not going to be solved this session. So much for the substantial ethics reform Speaker of the House Todd Richardson's promised.

While ethics are still a major concern, how the ACLU, Democrats and student advocacy groups spin Republican's moves in the General Assembly goes too far morally. Republicans are likely not making their bills and amendments in malice. Criticism should be on merit, not on person.