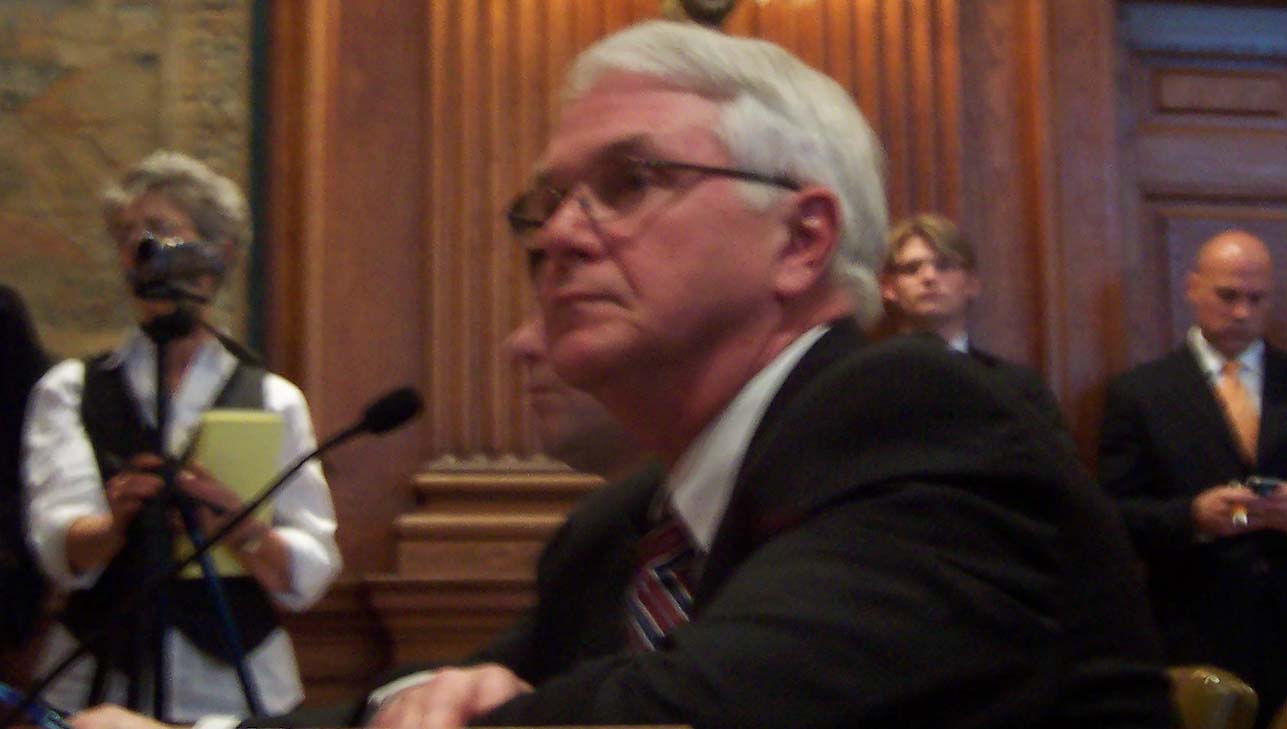 The chief executive of a St. Louis-based utility applying to build a second nuclear power plant in Callaway County repeatedly told Missouri senators Tuesday, Feb. 10, that his company is prepared to "walk away" from the project if a decades-old energy law is not overturned.

Tom Voss was testifying on a bill before the Senate Commerce Committee that would allow AmerenUE to pass some of the financing costs for the Callaway II plant onto ratepayers as the plant is being built. The AmerenUE president and CEO said the hike would be necessary to finance the more than $6 billion proposal.

Rates would increase 10 to 12 percent during the construction phase of the plant and would stabilize or decrease once it is operational, Voss said. According to his figures, Missouri ratepayers expend 40 percent less for AmerenUE services than the national average and 20 percent less than what they would pay other utilities in the state.

Voss further stated that, while AmerenUE, the largest electric provider in the state, is actively pursuing "renewables that make sense," the nuclear option for expanding service in Missouri is the most feasible right now.

Voss, however, got less than a positive response from the committee. The committee chairman, Sen. Brad Lager, R-Maryville, told Voss the votes currently were not there. "I don't think I can even get this bill out of committee, let alone the Senate," Lager told Voss.

Sen. Kurt Schaefer, R-Columbia, told Voss, "I support the expansion of this plant," but he then went on to question the anti-construction-work-in-progress bill for consumer protection considerations.

"There's basically no consumer protection in this bill at all for residential or industrial rate payers, and I think that's especially true if this plant is started and never finished," said Schaefer, who, before being elected to the Missouri Senate, handled legal issues regarding environmental regulation for the state's Natural Resources Department. "In fact the language as I read it, if the plant is approved yet the project is abandoned, not only is there no mechanism to refund to ratepayers the investment they've made, but you can actually continue to charge them the remainder of the project. I just don't think that's fundamentally fair."

Under the bill, any rate increases would still have to be approved by the Missouri Public Service Commission -- as they are currently -- but it would limit the period of time in which a review of a company's construction spending would be deemed prudent by the commission. According to Schaefer, the bill would shift the onus for a prudency review from the utility itself to the Public Service Commission, which would have to externally deem costs to be imprudent before stepping in.

"(This bill is) essentially a utility wish list," said Lewis Mills of the Missouri Office of the Public Counsel, which represents the interests of utility consumers in rate cases before the commission.

Voss, however, stated that, AmerenUE's proposal is "the least cost option" on the table. It would allow transmission lines for connection to possible future renewable sources, he argued, and, with the very real possibility of increased carbon taxes looming, he said it is necessary to turn away from coal-fired power plants, which, according to Voss, provide roughly 80 percent of Missouri's electricity.

In addition, Ameren's CEO said, expansion of the Callaway County nuclear site would create 12,000 jobs during construction, and as many as 4,000 jobs upon completion. 500 employees would actually work at the plant.

AmerenUE has already invested millions of dollars in the project in the form of federal permitting and engineering fees, Voss noted.

Voss and Mills were just two of more than 30 other witnesses speaking in favor and against the bill during Tuesday's approximately four-hour-long meeting.

The commerce committee took no immediate vote on the measure.

Committee chair Brad Lager, R-Maryville, said, "It's very reasonable to assume and understand that this is going to be a multiple year process ... I think that to believe that we're going to be able to do it all in one year is maybe wishful at best."

The Senate Jobs Committee has added a tax break for home buyers to Gov. Jay Nixon's job-creation bill that was approved earlier this year by the House.

The amendment approved Wednesday (Feb. 11) would provide consumers with up to a $1,000 tax break.

The tax break was added to a Senate version of the bill despite concerns voiced by committee chair John Griesheimer, R-Washington.

Griesheimer said the intention of the original bill was to create jobs; not to tack on tax abatements.

The Senate version of the measure, which was sponsored by Sen. David Pearce, R-Warrenburg, also raises a cap on tax incentives for businesses under the Quality Jobs Act from $60 million to $120 million.

The act, championed by Gov. Nixon, creates incentives for expanding small businesses and businesses that create new jobs in the state.

The measure now heads to the full Senate for debate.

The measure, sponsored by southwest Missouri Senator Delbert Scott, was prompted by a St. Louis-based company that went belly-up last year, leaving about 55,000 customers without the services they had arranged while still living.

Scott's bill would require the state Board of Embalmers and Funeral Directors to regularly examine a company's finances that provides pre-paid funerals.

The longest-tenured member of the Missouri Senate said Thursday that the savings for customers can be significant when the system works properly.

"If you live another thirty years, you're going to have that quality of service which may have cost, if you go out and buy it thirty years from now, another $5,000," Scott said.

Although no opposition to the bill emerged, state Sen. Jane Cunningham, R-St. Louis County, asked for more assurance on its necessity.

"Is there anything on any of the documentation that customers have to see that lets them know that this could be a very dangerous, risky investment?" she queried.

The bill faces one more vote in the Missouri Senate before it is sent to the state House of Representatives.

It took a few weeks, but the Missouri Senate on Tuesday (Feb. 10) confirmed Linda Martinez as head of the state's Economic Development department.

Her work against an ordinance in Valley Park that fines businesses who employ undocumented workers, had led some senators to question her qualifications for the post.

"We want hard working Missourians to get jobs -- not those that are here illegally -- and I want to make sure that her stances are strictly personal views and they will not bleed into her official capacity and duties," Rupp said.

He also addressed allegations made by state Sen. Robin Wright-Jones, D-St. Louis City, who said during session last week that she believed Rupp was blocking Martinez because of her gender.

"We have the governor's representatives coming out on the floor and saying the only reason we're standing up is because Ms. Martinez is a female," he said. "And yet, we have already approved numerous females on this floor."

Sen. Matt Bartle, R-Jackson County, said that while Gov. Jay Nixon may have been successful in having his appointment approved, Martinez "will be watched very carefully in the way in which she handles her job from the perspective of illegal immigration."

A spokesman in the governor's office state Tuesday, "Missouri businesses and communities have a tremendous amount to gain by the confirmation of an Economic Development director of this caliber who is already working to create jobs."

A openly gay member of the Missouri House has suggested that prejudice against her sexual orientation is behind her recent ejection from the House Committee on Children and Families.

While not directly charging sexual orientation bias, Rep. Jeanette Oxford, D-St. Louis City, said she heard that some members of the committee found her "offensive."

Oxford served on the Special Standing Committee on Children and Families for four years, but said she has not been given a satisfactory answer as to why House Speaker Ron Richard, R-Joplin, denied her a position in 2009.

The power to appoint representatives to committees rests solely with the House Speaker, but the minority leader is able to make recommendations.

Richard spokeswoman Kristen Blanchard said Oxford was rejected because many other representatives were interested in serving on the committee in question. Blanchard said Richard appointed Rep. Michael Corcoran, D-St. Louis County, because of their friendship and Corcoran's experience.

The chairwoman of the committee, Cynthia Davis, R-O'Fallon, said Oxford's sexual orientation was not a factor in her rejection from the committee.

"Everyone in this building knows that there's no guarantee that because you were on a committee in a previous term that does not mean you're going to be on that committee in a future term," she said.

Oxford defended her work in the past as an advocate for children's issues.

"If I were a poorly performing member of the committee, that would be plenty of justification for taking me off, because I believe we should do our jobs," she said. "But I've been doing my job."

Minority Floor Leader Paul LeVota, D-Jackson County, had recommended Oxford as a Democrat on the committee, but because she is not a formal member, she will be unable to cast direct votes or offer amendments to a bill in the committee.