►Nixon attempts to hit the ground running upon receipt of stimulus funding «Entered: 02/19/2009» 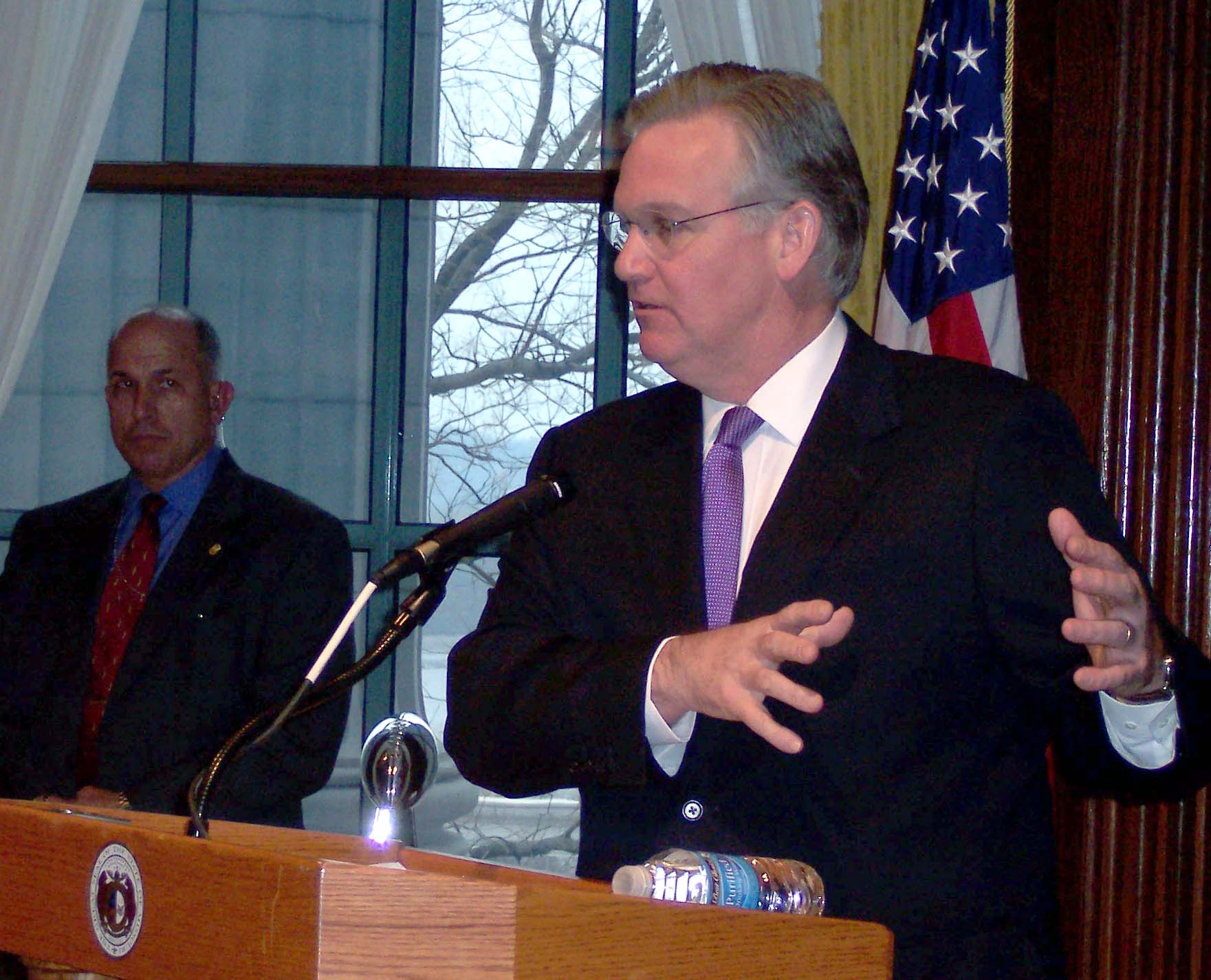 Following President Barack Obama's signature of a $787 billion stimulus plan Tuesday, Feb. 17, a new administration in Jefferson City wasted no time in addressing how it believes funds affecting Missouri should be spent.

Just minutes after the president's signature, Gov. Jay Nixon joined state transportation officials at the site of a bridge construction project that will be funded through the plan. But, during a news conference Wednesday, he offered few specifics on exactly how stimulus dollars would balance a projected $261 million state revenue shortfall for fiscal year 2009 and fund proposed education and health care initiatives.

Nixon did state his intent to accept all money readily available from the federal government, which could total more than $4 billion in Missouri.

"I am committed to accessing and using all these funds as urgently and strategically as possible to create jobs and get our economy moving," he said. "With these critical federal resources, we have the unprecedented opportunity to create jobs in these difficult economic times and position our economy -- not only for recovery -- but for a complete economic transformation."

The federal government is granting funds to states through three different pots of money. First, funds calculated by determined formulas will channel directly into certain sectors -- such as infrastructure improvements -- without much discretion from the state government. Competitive grants characterize the second pot, wherein states compete for billions of dollars to fund rural broadband infrastructure and green technology. The third pot, which is the smallest and is known as state stabilization funding, focuses on helping states restore revenue losses specifically in public education and health care.

Nixon's budget director Linda Luebbering estimated that third pot of money would equate to nearly $1 billion. Representatives with the National Conference of State Legislatures have confirmed that it is more discretionary in nature so long as the funds are not directed to a "rainy day fund or other protective fund" and so long as eligibility requirements for Missouri's Medicaid program are kept at or above their July 1, 2008, level.

Of the millions of dollars available for stabilizing the state's budget for education, 81 percent would go toward restoring funding losses and meeting No Child Left Behind provisions.

Several Missouri lawmakers have said these and similar expansions of on-going programs in the state are concerning in light of the fact that federal funding may not be available two years from now.

"That's the real concern that we in the House have, and I'm sure the Senate has as well," House Budget Committee chairman Allen Icet, R-Wildwood, said, "to get us locked in on one-time money for ongoing operations is just bad budgeting technique."

Republican senator Jason Crowell, of Cape Girardeau, said he fears a second "bailout" will be necessary in the coming years to relieve commitments made under the current stimulus plan.

But Nixon said those stipulations should not discourage the state from using one-time funds to finance education and health care.

"The real magic here is the one-time expenditures that give us a true opportunity to make an economic pivot to the future, which we're preparing just to do," he told reporters. "I just went to law school the one time, but I've been able to use that law degree for the rest of my life. When you're talking about worker training and education and you increase the value of workers in getting them trained, I don't see that as scary -- the fact that we would have a whole bunch of trained, high-tech workers and a whole bunch of trained medical professionals. I don't see that as a problem in the future; I see that as an opportunity for us."

In regard to infrastructure improvements using stimulus funds, four such projects were initiated Tuesday. Nixon was personally on-hand to promote $8.5 million improvements to a bridge running over the Osage River in Miller County, and according to the Missouri Department of Transportation, three other road projects -- on Route 60 in southwest Missouri, Interstate 55 in southeast Missouri and Interstate 35 in Clinton County -- began as well.

Nearly 30 other infrastructure projects have been targeted by the Transportation Department out of an estimated $637 million for road and bridge initiatives. $150 million more has been reserved for mass transit, waterway and pedestrian projects throughout the state.

While it remains to be seen whether state legislators will accept Nixon's full budget recommendations for the federal stimulus funds, Republican budget leaders agree that outright rejection of those funds is not in the state's best interest.

"In the sense that there is a bridge through a revenue shortfall that comes from this federal package, obviously that part is helpful," Nodler said. "What's challenging is that, in one sense, the size of the package is almost too large. It dumps really almost too much money into the state's treasury in a short enough period of time with significant enough restrictions on its use that it appears to me likely to cause downstream difficulties with unsustainable commitments to state programs that are encouraged by this federal bailout package."

A job-creation plan endorsed by Democratic Gov. Jay Nixon ran into opposition from a group of Republicans on the Senate floor Tuesday, Feb. 17.

A similar bill that would double a cap on tax credits for business expansion under the Quality Jobs Act won overwhelming support last week in the Missouri House.

But despite sponsorship from a fellow Republican lawmaker, Sen. David Pearce of Warrensburg, several GOP senators responded negatively to the bill under consideration.

Sen. Matt Bartle, R-Lee's Summit, said the use of tax credits has proliferated in recent years in order to compete with bordering states.

Sen. Jason Crowell, R-Cape Girardeau, questioned Pearce's projections that passage of the bill might result in as many as 30,000 jobs in the state.

"You say that it might create 30,000 jobs; it might do this," Crowell said. "I know of one thing we're actually certain it would do, and that is that you're spending over $100 million of hard-earned taxpayer money, and I want to know what we're going to get from it. What is the return on the investment?"

Pearce countered, "What's the option, doing nothing? Our unemployment level is 7.6 percent. We're losing jobs. Our state needs a shot in the arm."

"I think there's going to be a thorough and proper discussion about the efficacy of tax credits as economic development tools," Nixon said before urging passage of the Senate version of the bill, which, as currently written, would raise the annual limit on tax credits for expanding businesses, provide tax credits for businesses that relocate to existing mines, create a $1,000 state income tax credit for those who purchase a new home before the end of the year and reduce the threshold for eligibility for historic preservation tax credits.

Successful legislation concerning job-creation has been a top priority of the Democratic governor. He has asked for a bill to reach his desk for signature before the General Assembly recesses in mid-March.

(U.S. Rep. Roy Blunt, R-Missouri, announces his intent to vie for a seat in the U.S. Senate on Thursday at the state Capitol. Photo by: Becca Beitsch)

Making his second of four scheduled stops throughout the state, Blunt, a Springfield-area resident, said he intends to prevent Democrats from adding to their near-filibuster-proof majority in the federal Legislature's upper chamber.

Currently, Democrats are two seats away from reaching that 60-member majority in the U.S. Senate, with a highly-contested race in Minnesota still undecided.

Blunt said when current Republican senator Kit Bond announced last month that he would not file for re-election in 2010, "My first thought was that the 41 seats in the Senate are so important, so critical that we maintain that last balance in the system that otherwise is gone if the Senate slips to a filibuster-proof number."

He stressed his commitment to bipartisanship during his 12 years in Congress before lambasting House and Senate Democrats for their support the $787 billion economic stimulus bill that won approval last week.

According to Blunt, the stimulus plan is a result of "an overreaching liberal monopoly in Congress" and is an "impediment to recovery."

Before being elected to represent the state's 7th Congressional District in 1996, Blunt served as Missouri Secretary of State -- the first Republican to hold that position for half a century. From 2003 until last month, he was the Republican Whip in the U.S. House, which is the second highest-ranking member of the party. He is also the father of Missouri's previous governor, Matt Blunt.

Roy Blunt joins the only other mainstream-party politician to declare interest in the race, current Democratic Secretary of State Robin Carnahan.

Each candidate holds a reputation as a prolific fundraiser, and each carries a highly recognizable name in the State of Missouri.

AmerenUE officials indicated willingness to compromise on a rate plan for financing a second nuclear plant in Missouri after facing attacks at a second legislative hearing in as many weeks.

A Public Service Commission member said that while he is not endorsing the proposed legislation one way or the other, "a little bit of humility could go a long way in a time when you (AmerenUE) are seeking to raise people's rates 15, 20, maybe as much as 40 percent in the next few years."

Representatives for AmerenUE maintained during the House Utilities Committee meeting Tuesday, Feb. 17, that a nuclear plant would create jobs and would include various consumer protections. Ameren CEO Thomas Voss testified before a Missouri Senate committee last week that rates would only increase 10 to 12 percent during the construction phase of the plant and would stabilize or decrease once Callaway II is operational.

Despite four recent cell-phone-related traffic fatalities in Missouri, several state representatives say a bill restricting handheld cell phone usage while driving will likely not be passed into law this session.

The House Public Safety Committee heard testimony Tuesday, Feb. 17, in favor of the bill from its sponsor, Rep. Joe Smith, R-St. Charles, who has been pushing for similar legislation for the past five years. The bill has never made it out of committee, though, and Smith said this was the first time any of his bills have even come before a committee.

Smith said the bill would place a $20 first-time fine on any non-commercial driver caught using his or her cell phone without a hands-free device. Two-way radio communication by commercial drivers would be permitted, however.

After Smith offered to attempt to amend the legislation to cover commercial drivers, Rep. Michael Corcoran, D-St. Ann, said, "Don't rewrite it on my count, because I don't support your bill at all."

Republican colleagues of Smith's did not seem receptive to the bill either. Rep. Bryan Stevenson, R-Webb City, said the legislation was another example of the government intruding upon residents' liberties.

Corcoran said he would bet that this time next year, Missourians will still be able to use their cell phones without a hands-free device. He said it is highly unlikely the full House will take a vote on Smith's bill unless it's attached to another bill as an amendment.

"The fact that he has had the bill for a few years and not been moving it all hasn't helped," he said. "I would say the bill has a slim chance to make it out of committee; I'd say it has a slim to no chance at all to make it to the floor."

According to the Governors Highway Safety Association, five U.S. states have bans on handheld cellular devices for all drivers.

Several bills before the Missouri General Assembly received discussion, committee hearings and actual votes this week. Among them are: