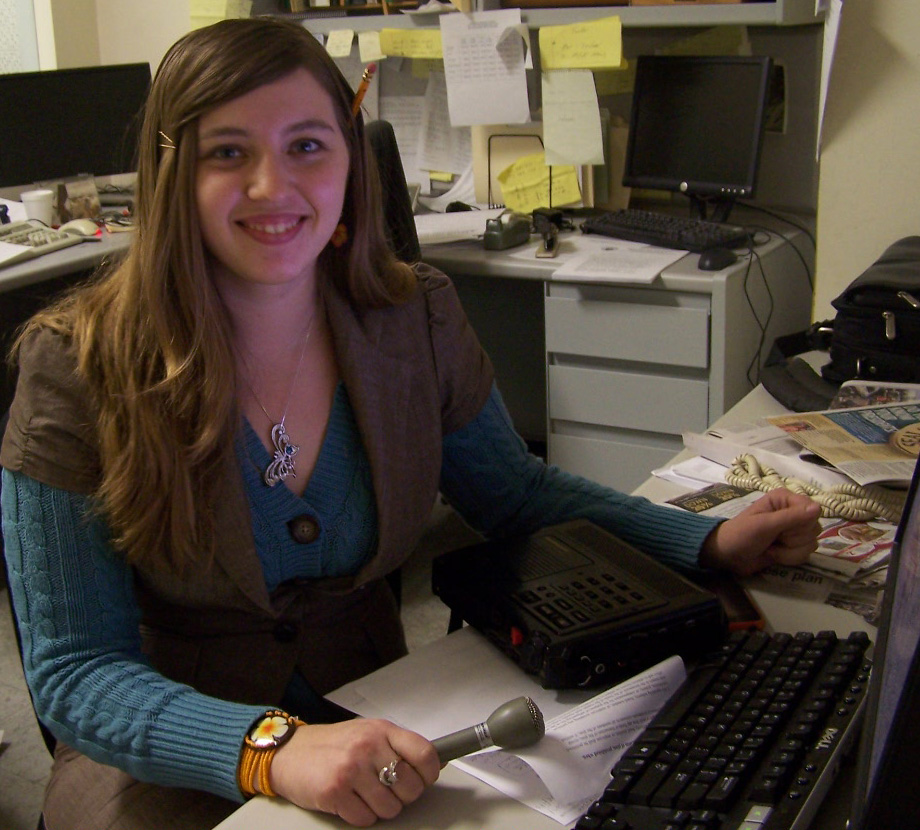 Hi! My name is Christine Slusser, I worked four semesters out of the state Capitol bureau editing and writing radio stories.

I worked with Missouri Digital News since 2008 and graduated from The Missouri School of Journalism in 2010.

My major is broadcast journalism, with an emphasis in television.  Scroll down through all the stories to read my MDN blog.

This will be my last blog post I write to you. I have had an amazing four semesters writing and editing radio stories for you. I've learned a lot - but that's probably because I had the best editor in the world. I'm sure you've heard his loud voice echoing through your halls. Here, let me show you a picture of him:

Phill Brooks is his name, two "L's". He romps around the Capitol training journalists and taking names. He will turn your weak writing into sensational headlines. He will train you to ask legislators the right questions and get the story done - right. While his red pen is quite scary when it's tearing up your story, it's his way of teaching you to be a better journalist.

So, adieu state Capitol. May the echo of my heels resonate through your halls at least one more time after this.

After wading through some awful journalism comics...I found one that made me chuckle...

See you around - you'll be here a lot longer than I will.

The headline refers to a little assignment my editor had me do. I walked around the halls of the state Capitol and asked, "Do you understand what I mean when I say S-T-D?" Literally. To seven different older to elderly people.

The reason for the assignment was to see if I could use the acronym for sexually transmitted diseases. I needed to know if the population would understand what I meant if I shortened it. It saved me two whole seconds on my story...that's huge in radio.

The reason I needed to know is because I covered a report on gonorrhea and chlamydia.

Yes,  you read that correctly.

So, what's this all about?

The House Health Care Committee heard a bill today that would allow a physician to treat both patients with STDs even if only one is present.

The "big deal"? Many times patients are too embarrassed to come with their partner...this way both can get treated and the disease can be alleviated much faster.

In all seriousness, however, an STD is no laughing matter. It is highly contagious and if one partner has it - the other probably does, too.

To read my radio story on the matter, click here.

It's that time of year again...time for the legislative session! Saddle up your horses - it's going to be a bumpy ride full of long nights, filibusters and frozen dinners.

I hope you've grabbed your stirrups.